World first for Snow Leopard Blog! A story about a soldier standing night guard at a small outpost who recognised one of the world’s most endangered and rare cats. Sergeant Carl Duke (US Army) sent me this amazing footage using advanced technology to film the snow leopard eight (!) kilometers in the distance. This was in the war zone on the border of Pakistan and Afghanistan. Carl told the intriguing story of how the footage was obtained.

“This video was made in the late fall of 2008 at Combat Outpost Lowell near Kamu, Kamdesh District, Nuristan Province, Afghanistan.  In the middle of the night SGT G was on guard scanning the surrounding hills when he spotted the animal with its give-away long thick tail. Fortunately, he had his personal camera on him and put it up to the screen of the LRAS3 (Long-Range Advance Scout Surveillance System) and pushed record.” 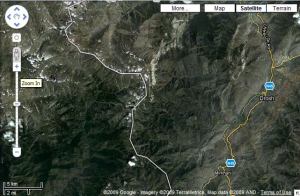 Click image for close-up of the rugged mountains on the Afghanistan and Pakistan border where these videos were taken.

Carl said the snow leopard was most likely hunting for monkeys or livestock.

During his tour in Afghanistan Carl made a point of asking locals what they knew about snow leopards.  “Some people complained about them, one person said if you eat them you become more virile, another said someone had captured a cub and sold it a few years ago in Chawkay District, Konar Province.  One man claimed snow leopards shoot steel claws 15 meters!”

Naturally there’s little in the way of snow leopard research or conservation in this country, especially here in the dangerous border region, so it’s important any information be shared and Carl should be congratulated for his interest and concern about snow leopards. Carl said he hoped one day to go back to Afghanistan “I’ve heard a lot of great things about Afghanistan during the 60’s and 70’s. There’s so much I’d like to see and enjoy in Afghanistan – it’s just too dangerous now.”