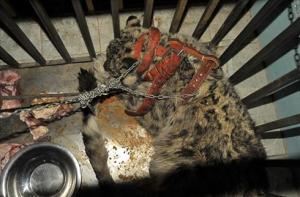 As humans we’re always looking for the positive in a story. We have to look pretty deep to get a positive from this horrible story from Afghanistan this week. Some conservationists are saying it shows that local Afghans are more protective of snow leopards now – lets hope so. But the sad death of this animal was pretty shocking.

At the end of February a German civilian heard about a possible snow leopard for sale for $50,000. Richard Fite, a senior agricultural advisor with the U.S. Dept. of Agriculture, currently stationed in Afghanistan, said he became involved when an official in the Afghanistan National Environmental Protection Agency (ANEPA) did the right thing and contacted police.

When Fite saw the snow leopard it was in terrible condition

It “had been snared, had all four legs bound together, and was transported by truck for at least 2-3 days over a terrible road in cold damp weather, poked and prodded by many, held in captivity for a week.”

“For a normally solitary, wild animal, the mental stress would have been just unimaginable.  When I first saw the animal, on its fourth or fifth day of captivity, it was already in trouble — quite passive and subdued.  During the next two days, it became progressively more so.”

Fite worked with international and local officials to provide aid in the form of heavy mittens, an improvised rabies pole, an electric heater and medical supplies for the animal’s treatment. The Aria Guest House in Feyzabad, provided a secluded location for the cat.  It also provided food, staff, and a small propane heater. USAID organised a helicopter to transport the leopard back to the Wakhan corridor once it was healthy.

“It seemed to respond to subcutaneous fluids given the afternoon of the second day, but died early the following morning.” Full story here.

In a letter to the Snow Leopard Network members Fite said,  ” the final outcome of course is not what we all wished but on the positive side, I note that this incident generated a great amount of publicity for snow leopards in Afghanistan and that interest in this animal reached all the way to the highest levels of the Afghan government and the U.S. Embassy.  Perhaps that, at least, is a good sign for the future.”

Thankyou to ALL those people who desperately tried to save this animal.